The Paradoxical Glory of the Cross

We get confused about glory. You will hear someone say, “Wouldn’t it be wonderful if so-and-so, this famous athlete, became a Christian? Then God would get lots of glory.” I think that is very true: God does get glory, and he gets praise every time someone becomes a Christian. If someone famous becomes a Christian, then the possibility of other people turning to Christ increases. That’s good. But it’s almost as if we want God to be famous!

Let me give another example. This was, I believe, in Christianity Today. Edith Schaeffer was being interviewed, and the interviewer asked her, “Who is the greatest Christian woman living today?” She said, “We don’t know her name. She is dying somewhere in a cancer ward or living in India.” What a wonderful answer! The problem I have, which it sounds like Edith also had, is that the question supposes we could know who the “greatest” Christian was! As if greatness, where you are known, is a mark of Christian maturity. It’s a wrong idea of glory. It’s an idea of glory that is almost the opposite of what God says glory is.

The only celebrity photo you could take of Christ was when he was with Pilate. But Jesus didn’t look very good in that photo.

Jesus said something in the last few months of his life that’s like a knife going right into the way we think about glory. “What is highly esteemed among men is detestable in the sight of God.” (Luke 16:15) Think of Jesus’ life. He probably wouldn’t have been interviewed by the media or photographed with celebrities. What are the photos given to us of Jesus in Scripture? Jesus and an almost-prostitute at the well. Jesus and Zacchaeus. Jesus and loudmouth Peter. Those are the photos we get of Jesus. The only celebrity photo you could take of Christ was when he was with Pilate. But Jesus didn’t look very good in that photo.

When God reveals himself to us, we find something very different than what we expect. Remember how angry Jesus got when the Pharisees asked him for a sign? The last time they asked, Jesus just spit out his answer: “A wicked generation asks that kind of question.”

The idea of glory is a dominant theme in the book of John. “The Word became flesh and dwelt among us, and we beheld his glory, glory as the only begotten from the Father, full of grace and truth,” John writes in 1:14. In other words, “We saw the glory of God.” What was it that they were seeing?

To get the answer, we look at Jesus’ own reflections about his glory. When the Greeks have come to him in John 12:23, they say they want to see Jesus. Jesus responds, “The hour has come for the Son of Man to be glorified.” In other words, this is going to tell us what the glory of God is. When God shows his glory, what does he show? What does he talk about? The immediate thing is his death. “I tell you the truth, unless a kernel of wheat falls to the ground and dies, it remains only a single seed.”

The same thing happens at the Last Supper in John 13:31. Right after Judas leaves, in anticipation of his own death, Jesus says, “Now is the Son of Man glorified, and God is glorified in him.” If that wasn’t clear enough, he again speaks about the hour of his death in the High Priestly Prayer (That’s the focus of the whole conversation. That is the event that is coming.) “The hour has come. Glorify thy Son, that the Son may glorify thee.”

This is so surprising because when we think of glory, we think of resurrection morning. We say, “That was a glorious morning.” And that’s a proper usage of the word. Or we think of Fourth of July fireworks, or how glorious it will be when Jesus comes back. That’s all correct. But what Jesus is saying from those three passages in John is that the supreme display of the glory of God is at the cross. There you have a paradox, something that doesn’t seem to fit. Our normal idea of glory is this incredible, shiny, bright thing that leaves everybody astounded. The glory of God is revealed in God’s weakness as he loves us. Bishop Stephan Neill said, “If the crucifixion of Jesus is in some way, as Christians have believed, the dying of God himself, then we can understand what God is like.”

Someone’s glory is the essence of who they are. At the cross, we see that God’s essence is to hold nothing back for himself. He is completely “other,” because at the cross, God expends himself completely for us to the point of death. And that’s his glory. The essence of God is that there is nothing in God for God. It is all for us.

This article is excerpted from the transcript of The Love Course Audio, Part 5: Entering the Passion of Jesus, Chapter 6, "Glory." © seeJesus 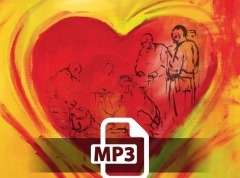 Entering the Compassion of Jesus Audio
Love isn’t like the movies. It’s not accompanied by candlelight... 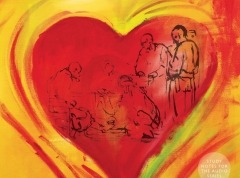 Entering the Compassion of Jesus Manual
Love isn’t like the movies, accompanied by candlelight and violin...